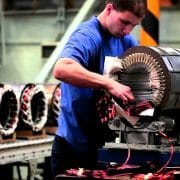 Checking the motor and drive terminal connections is a step many people miss or do incorrectly during an ABB drive repair. Heat cycles and mechanical vibration can lead to sub-standard connections, as can standard preventative maintenance practices. Reusing torque screws is not a good Idea, and further tightening an already tight connection, can ruin the connection. Bad connections eventually lead to arcing. Arcing at the drive input terminal can result in nuisance over voltage faults, clearing of input fuses, or damage to protective components. Arcing at the drive output terminal could result in over-current faults or even damage to the power components.Loose connections can cause erratic operation. For example, a loose START/STOP signal wire can cause uncontrollable drive starting and stopping. A loose speed reference wire can cause the drive speed to fluctuate, resulting in scrap, machine damage, or personnel injury.

Conduct Diode and IGBT Tests
There are a number of methods to test the input and output power sections during an ABB drive repair, and this step is done prior to applying power to the drive unit. If for any reason there is a short on the input side or output side of the drive, further damage can be caused to the unit if power is applied to it.For this reason, Precision Electric uses meters to properly test the input and output power sections of the drive prior to applying power to the actual unit. If a short is found, the unit can be disassembled and the cause of the short can be diagnosed and quoted for repair. If the ABB drive repair is too costly, then an ABB replacement is offered to the customer.

Power Up Unit
If the input and output power sections test healthy during the ABBdrive repairprocess, Precision Electric will power the unit and perform amp reading and output frequency tests. Precision Electricslowly increases the power voltage to the ABB unit until the rated input voltage of the drive is reached. Depending on whether or not the ABBdrive provides a display will determine what further action will be taken. If display is unavailable, disassembly and diagnosis of the internal power supply of the control section of the drive is necessary to further evaluate cause of failure and establish cost and lead time for the ABB drive repair.

Run A Motor
If the previous three tests have passed during an ABB drive repair process, Precision Electric willrun a basic jog function of the drive with a simple template program. Often when a drive comes into our facility, we make sure to backup all existing programs stored in the drive prior to inputting a template program and running a test procedure. This ensures that we have a backup copy of the program.The best method for backing up depends on the brand of drive, but after it has been backed up, we either reset the ABB drive to factory defaults through the keypad and recommission a basic start, stop and job application or closed loop if an encoder is involved. If the motor will not run, it will be necessary to check the output voltages and current ratings going to the motor to see if the drive is functioning properly to rotate the motor.

Routine Maintenance
Most ABBdrive failure can be prevented with routine maintenance. ABB drive repair cost and lead times can also be reduced with routine maintenance. ABBdrive repair can be expensive and cost manufacturers production downtime during the repair process. Most manufacturers keep spare drives in stock to prevent production downtime when their equipment repairs are in process.

ABBdrive repair should be taken with extreme caution and only be performed by technicians who have required training and experience to work with electrical equipment. Precision Electric strongly recommends to consult an expert in the field when repairing all industrial electrical equipment. Many drive controllers have an internal DC bus that retains a charge after power has been cut to the drive, as a result, it does not mean it’s safe to work with. Technicians working ABBdrives and other electrical equipmentmust always take extra precautions to ensure proper safety measures are taken, or injury or even death may occur.

Approximately one third of the world’s electrical energy is supplied by electric motors in fixed-speed centrifugal pump, fan, and air compressor applications. These fixed-speed applications do not usuallyrequire the full load speed (RPM) of the electric motor they’re operating. By integrating VFD controllersto these applications, the motor speeds are reduced, and power costs can be reduced by 50% or more. Technology has reduced cost and physical size of VFD controllers, and has improved performance through advances in semiconductor switching devices, simulation, control techniques, and control hardware and software.

The majority of VFD controllersin the market today contain electronic circuitry that converts 60 Hertz Line power into direct current. The VFD controller converts this line power into a pulsed output voltage that duplicates varying alternating current to a desired frequency (speed).A properly applied VFD controllerpaired with an AC electric motor, will significantly reduce operating costs. This is particularly true for variable torque loads such asFans,Blowers, andPumps.Blowers, for example, are often used with dampers to control air flow. These dampers may operate either manually or automatically. When dampers are closed, 50% of the electric motor current will drop to approximately 60% of Full Load nameplate current. By utilizing a motor drive in this application, current draw in the motor will be reduced 30% for every 10% drop in speed. The same electric motor operating froma motor drive at 50% speed, will draw approximately 20% of the full load current.

Approximately one third of electrical energy in the world is supplied by electric motors in fixed-speed centrifugal pump, fan, and air compressor applications. These fixed-speed applications don’t usually needthe full load speed of the electric motor theyre operating. By installing a VFD device to these applications, electric motor speeds are reduced, and power costs can be reduced by 50% or more. Technology has allowed cost and physical size reduction of VFD devices, and has improved performance through advances in semiconductor switching devices, simulation, control techniques, control hardware and software.

A properly applied VFD device and electric motor will significantly reduce energycosts for manufacturers. This is particularly true for variable torque loads such as fans, blowers, and pumps.Blowers are often used with dampers to control air flow; These dampers may operate either manually or automatically. When dampers are closed, 50% of the electric motor current will drop to approximately 60% of full load nameplate current. By utilizing a VFD devicein blower applications, the current draw of the motor will be reduced 30% for every 10% drop in speed; The same electric motor operating froma VFD device at 50% speed, will draw approximately 20% of the full load current.